Here it is July and my yard is still not “visitor ready” (not that I anticipate having many–or maybe even any–visitors this summer). Normally, I am able to get a jump on things early in the season, but the rainy spring prevented that from happening. But, really, the main obstacle is that I’m trying to tackle a few projects this year and those are understandably taking longer than simply weeding the yard.

My main project, which is almost complete, was to replant the pond hillside. Originally, I planted some blue cornflowers there and they ended up taking over the whole hillside. This wouldn’t be an issue, but after they flower, the stalks die off and need to be cut back (and this happens multiple times a season). It got to be a bit much. So, I removed most of those and bought some new plants at the Cambria County Conservation District’s annual plant sale. This also caused a bit of a delay as the sale is usually held in April, but had to be pushed back to May due to the coronavirus restrictions. Anyway, I had to weed before I put the plants in and that was a chore. Then I got distracted with my vegetable garden for a few weeks. Then by the time I got back to it, it needed weeded again! After the second round of weeding, I applied mulch, which has cut back on further weeds, but has not eliminated them entirely. This job is almost done–there’s just one small patch left to weed and mulch. Since it is so dry outside, this is taking longer than normal. One way or another, I’m going to wrap it up this weekend.

Another thing I decided to do is remove the English ivy that is growing all over and around the shed. It’s everywhere, really. This is likely to be a multi-year project as that stuff will just keep popping up. It is so dense and very difficult to remove. I’ve been running an edger over it just to cut it into sections. I have removed approximately 1/4 of it, but I haven’t worked on that in a few weeks because I’ve been concentrating on the mulching project.

The last project, which has not even started, is to plant grass in the dog area. Currently the area is mulched and has been for quite a number of years. It has mostly worked out well but after the unusually rainy spring and dogs tracking in wet mulch and dirt multiple times a day, I’ve decided that grass would be a better option. Also, it’s just one more area that needs weeded multiple times in the summer. This project’s going to be tricky, though. I will have to do it in sections so the dogs have somewhere to go as the grass grows. Then, I’ll be back to having burned spots in the lawn, but what can you do? 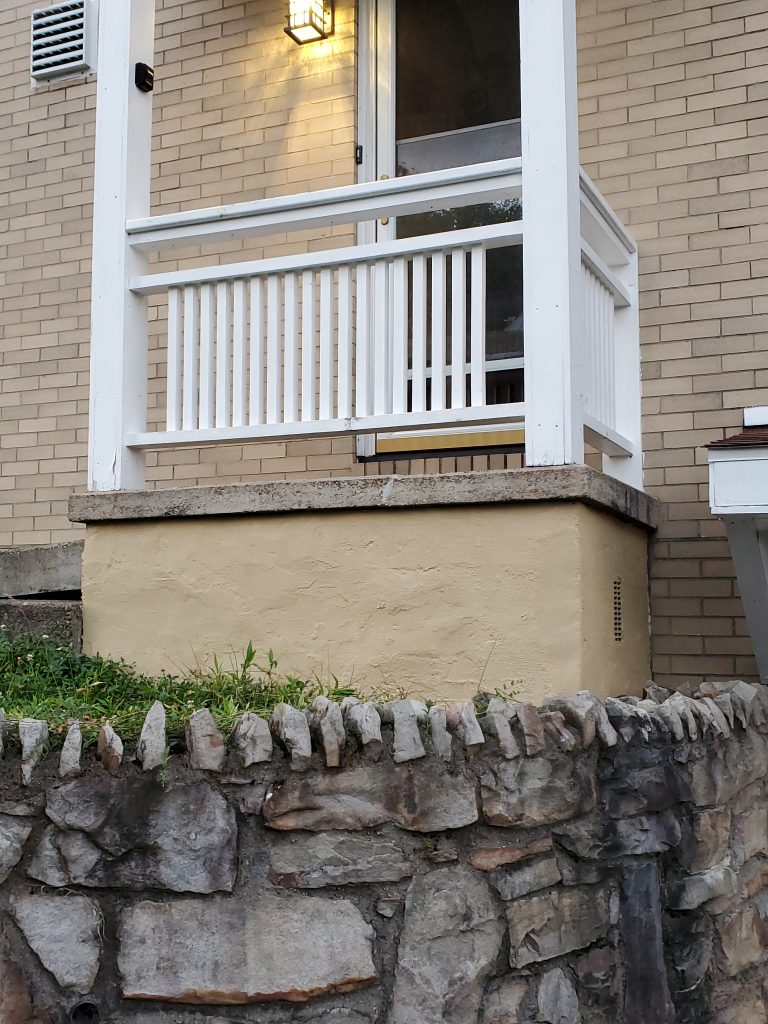 Remember how my side porch was crumbling and then I patched it up? Well, enough time passed so I was able to paint it Monday night (I had to etch and prime prior to doing this). Anyway, it turned out pretty good. You wouldn’t even know it’s falling apart now.

Edit: my mom was the one who told me about the book.

This was a pretty great thriller written by the author Loreth Anne White. I guess she usually writes romantic suspense (whatever that is). I won’t get into the plot, because I’ll end up giving something away–it was a pretty complex story. One problem I had with it was that I couldn’t keep the characters straight–there were a bunch of them. But I liked it enough that I added another one of her books to my wishlist. All the ones I looked at were well-reviewed, so I’m hoping the next one is as good as this one was. It would be nice to have another go-to author.

I’m not positive how I heard about this author, but Stephen King often talks about books he’s reading in his Twitter account. I usually take a look at his recommendations to see if it’s something I might be interested in. Apparently this one was just that.

I am off work today and had to run to a locally owned store for some supplies this morning. I was greeted at the door with a message that said “face masks optional” and wasn’t happy to see that. In Pennsylvania, masks are, in fact, required (granted, there’s currently not a penalty if you are caught without a mask, but do your civic duty and wear the damned mask). I was happy to see all of the shoppers had masks on. However, not a single store employee had one on. I probably should have left, but I got what I needed and went home. I will not be shopping there again, though.

Cases are skyrocketing in the south and west and it’s just a matter of time before PA’s numbers go back up since no one can seem to follow the rules. That’s the thing about this disease–believe in it or not, but it’ll get to you eventually. In fact, PA’s numbers are currently creeping back up after hitting all time lows just a week ago. I know the governor has taken a lot of slack for his actions during this crisis, but PA is the 5th most populous state, yet we are 8th for COVID-19 cases. That’s a win in my book.

I vaguely remember hearing about the sexual harassment case that this movie was based on, but had since forgotten the details. In fact, if you would have asked me if Megyn Kelly was still on Fox News, I would have incorrectly said yes (because I’m not the kind of person who watches Fox News). That said, this was a pretty good movie. It had Charlize Theron, Nicole Kidman, and up-and-comer Margot Robbie.

#flowers from the #garden

Despite the fact that I sold my bike last year, I'

Grilled chicken tenders on a bed of lettuce, scall