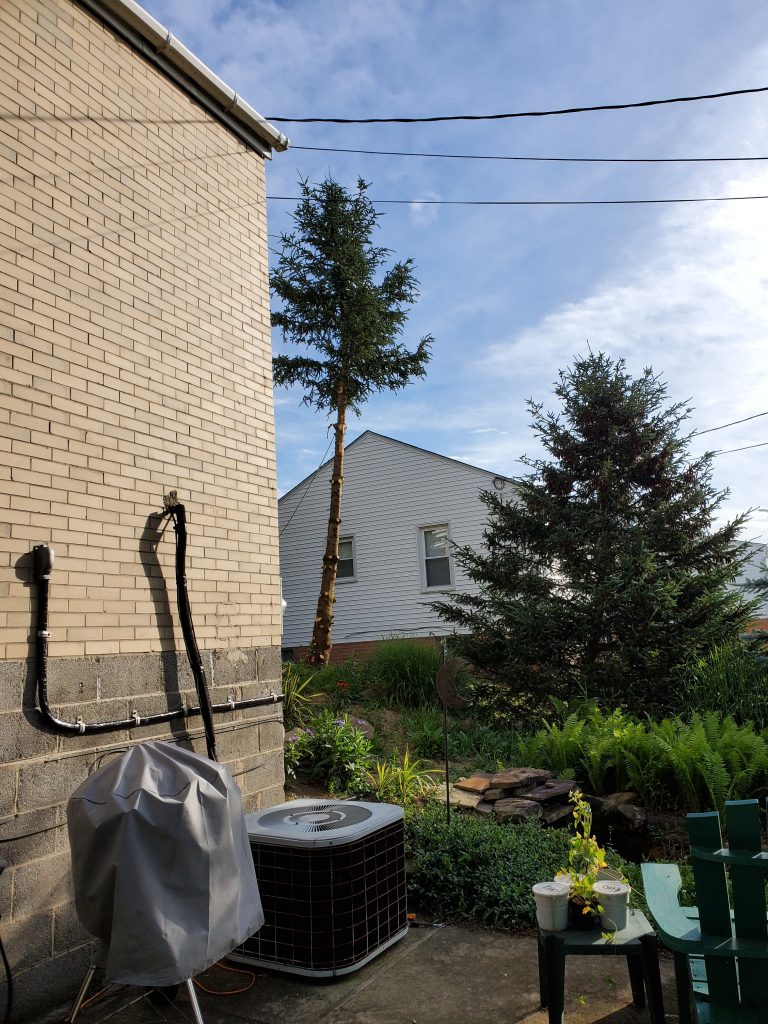 One of the pine trees in my side yard got way bigger than expected so I had it removed today. This was an “in progresss” photo. I was half tempted to leave it like that–it looked like a palm tree. Haha. Sadly, I will now have to look at the neighbor’s house through the gaping hole that was left by the tree.

And, this problem’s only going to get worse. I have three more pine trees on the side of the house and they all might need to go at some point. There’s another one out there that is the same variety as the one that was removed today, so I’m sure it will also get too big. I planned on having it removed this year, but since it was so much smaller than the other one, I figured it could wait a while longer (it’s the other tree shown in the picture). The remaining two trees are of a different variety, so we’ll see what they do.

I plan on planting some ornamental grasses at the top of the pond area so I don’t have to see the neighbor’s house when I’m enjoying the pond. When we planted arborvitae in the back a few years ago, we also temporarily planted some grasses in between them to fill in the gaps until the arborvitae could take hold. Well, the arborvitae are looking pretty good, so I could certainly move a few of the grasses.

Ideal Tree Service, who trimmed my deciduous trees last year, took care of this in short order (they were here for less than an hour).

Jake and I watched this movie Friday night. It was good, as all Tarantino movies are. Maybe I was just tired, but it seemed a little slow moving. I did love the ending, though. And, it had Brad Pitt.

The humane society opened back up to the public this week and the pack walks were reinstated as well. The first one was today. I went to it and we had a really good turnout–six walkers! It was pretty much just the usual people, but I wasn’t sure if everyone was going to show up because they just sent the email out late last night. Unfortunately, there are a lot of dogs there, so we were all there till after 11 (it starts at 9). Anyway,  it was good to get back into my routine. I may do some solo walks now and then, and maybe do the foster for a day thing on occasion, but the pack walks will be how I spend most of my volunteer hours.

My 50th birthday was on Friday. Jake and I celebrated by ordering takeout from Franklin Street Bar & Grill (one of my favorite places!). Later that evening I fired up the chiminea and we made campfire cones and then we worked on a puzzle for a bit while watching Cheers. It was a nice day.

On Saturday, we went to my parents’ for a cookout (also for my birthday and kind of my brother’s, which was in May). It’s the first time we’ve gotten together since February due to the state of the world.

Sunday was a free day so I did a bunch of stuff around the house and walked dogs at the shelter.

I guess this is the year to replace small appliances. I tried putting the dehumidifier on recently and, while it technically works, the compressor never shuts off (even if you power it off!). So, guess what I just bought? I can’t say I’m surprised this happened because it was acting weird at the end of last season, but I was hoping I just left it running too long and it froze up. This was certainly not the case.

A Google search told me that the control board would need to be replaced, so I wasn’t about to deal with that (especially since I can’t remember the age of the dehumidifier). So, I’ll be getting a new one delivered on Tuesday. Thanks, Best Buy!

#flowers from the #garden

Despite the fact that I sold my bike last year, I'

Grilled chicken tenders on a bed of lettuce, scall