In my never-ending quest to learn how to do everything, I made hard cheese last weekend (previously, I have made mozzarella and ricotta). Brian helped, too. It was pretty fun, but it was a very long process (partly because this was our first attempt, but mostly because cheese takes a long time to make). We made a farmhouse cheddar, which is the recommended first hard cheese due its shorter aging process and ease of process.

The first step was to heat the milk. This could not be done on the stove, so we put the cheese pot in a larger pot filled with hot water. 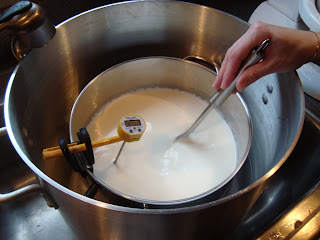 Once it got up to temperature, we added a cheese starter culture and ripened the milk for 45 minutes. Next we added rennet (which is an enzyme that causes milk to separate into curds and whey). Again, the milk had to sit 45 minutes. Once the curds set, I cut them into 1/2 inch cubes. 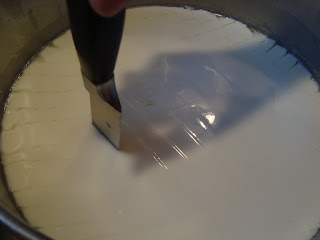 Next, the curds had to be cooked–they were heated slowly until the temperature reached 100 degrees. This process pulls the excess whey from the curds. 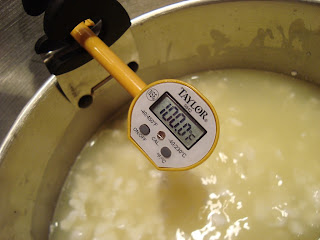 After resting for 5 minutes, the whey was drained from the curds and the curds were tied up in a piece of cheesecloth and left to drain for one hour. 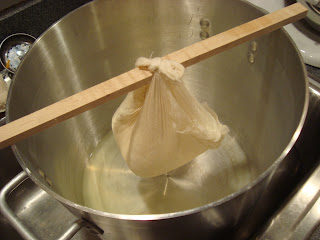 After this the curds were broken up into pieces and salted. 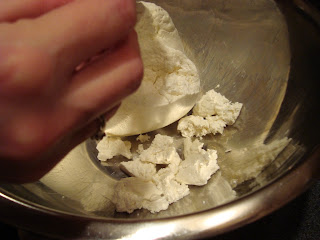 Then they were put into the cheese mold and pressed with increasing amounts of weight. The first two pressings were at lower weights for shorter periods of time. The third pressing was at a high weight (50 pounds) for 12 hours. Also, check out the nifty cheese press Brian was kind enough to build for me. 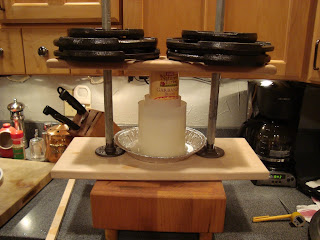 After the pressing, you end up with something that sort of looks like cheese. 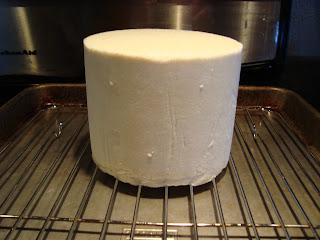 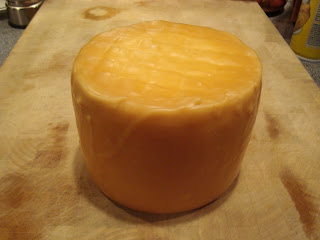 As I do not have a cheese cave, I am aging my cheese in the fridge. This is not the recommended method, but I have no other way to do it. Since this cheese only has to age a month, this probably won’t have too negative an effect on it. But, once I start making other kinds of cheese, I’m going to have to figure something out.

Stay tuned for next month, when I cut the cheese. Literally, not figuratively.

All supplies (and my cheese making recipe book) were purchased from New England Cheesemaking Supply Company.

The greatest place on earth. #goldenretrievers

Starting to get a handle on the pizza oven thing.