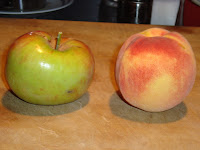 The world’s most expensive fruit! Considering the fact that I purchased three fruit trees (apple, peach, and cherries) and then some fruit sox to keep the bugs away, I didn’t get much of a harvest for my money. Note: the entire harvest is shown in the photo.

I’m blaming it on the birds–I don’t know what else would have done such a thing. All of the trees had fruit on them at the beginning of the season. It wasn’t long after I put the fruit sox on the apples and peaches that the fruit disappeared. So, I guess I’ll be spending even more money next year on bird netting.

I will say, that the peach was the most delicious I have ever eaten. Probably not worth the money, though.

Tonight's a mojito and movie kind of night.